The seafront Akti Fine Rooms is a complex of rooms, located just a few metres from the main harbour of Skopelos Town

Guests of Akti Fine Rooms enjoy quick and easy access to the main coastline, a 2-minute walk away, as well as to a variety of pavement cafes, bars and restaurants. Within 20 metres, you will find the taxi rank and bus stop.

Lost in the Aegean Sea, the “emerald” island of Skopelos is not only one of the greenest islands of the Mediterranean but also its historical and cultural values have lasted through the century.

From a sum of historical references and ancient records there are names like Stafilos (son of Dionysos and Ariadni), Agon (Olympic champion from 600 B.C.) and Dioklis (3rd century B.C. historian) appearing as residents of the island, while the oldest signs of habitation start from the Mycenae era (16th-14th century B.C.).The historical course of Skopelos island was defined from continuous colonization which promoted economical and political relations with Athens and the rest of the Aegean from the antiquity. As a result monument temples were built as well as walls in order to protect its residents from conflicts that happened from time to time.

The most important source of economical growth was shipping, because the island’s strategic location in the Aegean and the residents exploited it properly. Like that Peparithos (ancient name of Skopelos) emerged as a considerable naval and commerce power and until the Byzantine years was the most important port in the Aegean. Despite piracy during the middle-ages threatening the prosperity of the island, in the 18th century the island’s commerce activities showed a significant growth and as of then exporting local products like the famous, since ancient Peparithos, wine, oil and different kinds of fruits were expanding towards Istanbul and the Black sea.

Until the dawn of the Greek Revolution, where local merchants and craftsmen contributed, Skopelos was praised by many travelers and geographers for the greatness of its port and its shipbuilding.

Toward the end of the 19th century, the appearance of steam boats brought decay in the traditional sailboat commerce of Skopelos. Despite that, the conservation of the shipwrights until early 1970’s, kept alive a unique form of art which is now captured in small ship models.The result of Skopelos economical growth during the 18th and 19th centuries, broaden the quality of life. Until today there are elements of its cultural identity, like pottery, cutlery, carpeting, woodcarving, architecture, interior design, the rich traditions and its folk music. And of course, above all, the traditional women’s costume which is one of the most evaluated in Greece, made from the finest fabrics with impressive needle crafting and elaborate accessories. It is the bearer of Skopelos tradition, moral and elegance. Skopeliot women’s costume reflects a pure island society.

Going through the modern age of the 20th century and more specific after the 1970’s, the residents activities turned to tourism. The coming years brought great development and the island acquired the structure of a modern summer destination. Today Skopelos can offer completed services with significant infrastructure for tourists like shops, supermarkets, restaurants, tourist agents, public services and health centers. Among the local products there are high quality plums, honey, olives, oil, wine and different kinds of diary like the goat cheese – basic ingredient of the famous cheese pie of Skopelos. Fresh fishes and quality goat meat complete the menus of many restaurants.

The activities of the visitors are not limited in the refreshing dives in the beautiful beaches and the night walks in the Town of Skopelos. The exploration of the natural environment is highly recommended and one tour by feet, bicycle, car or a boat turns into a unique experience. The green fields combined with the colors of the sea in a magical way and the view from many spots in the island becomes truly impressive. Those who love the sea they can try to rent a boat or a kayak and there are even places for scuba diving. The crystal clear waters and the small beaches that pop between the cliffs, enchants the visitors. Fishing can be a joyful and relaxing activity but can also provide a fresh dinner at the end of the day. There are many charming locations hidden throughout the island that can fill your photograph albums but also your memories of summer. 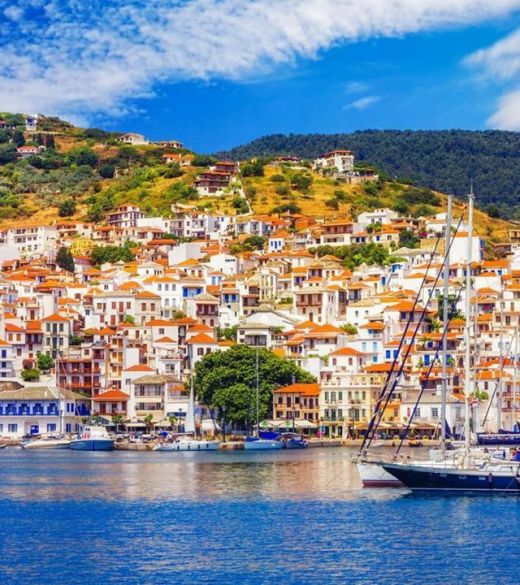 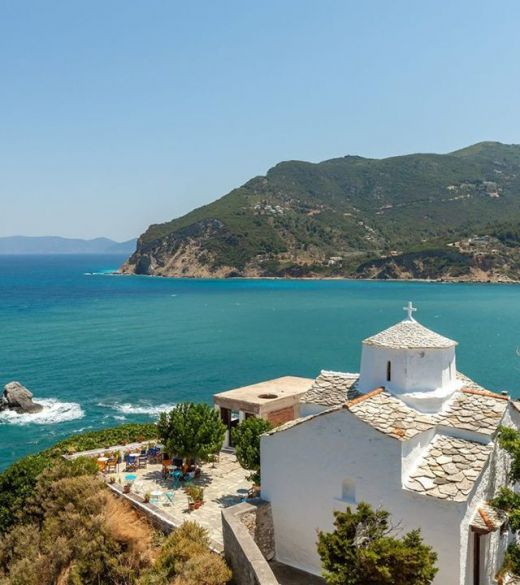